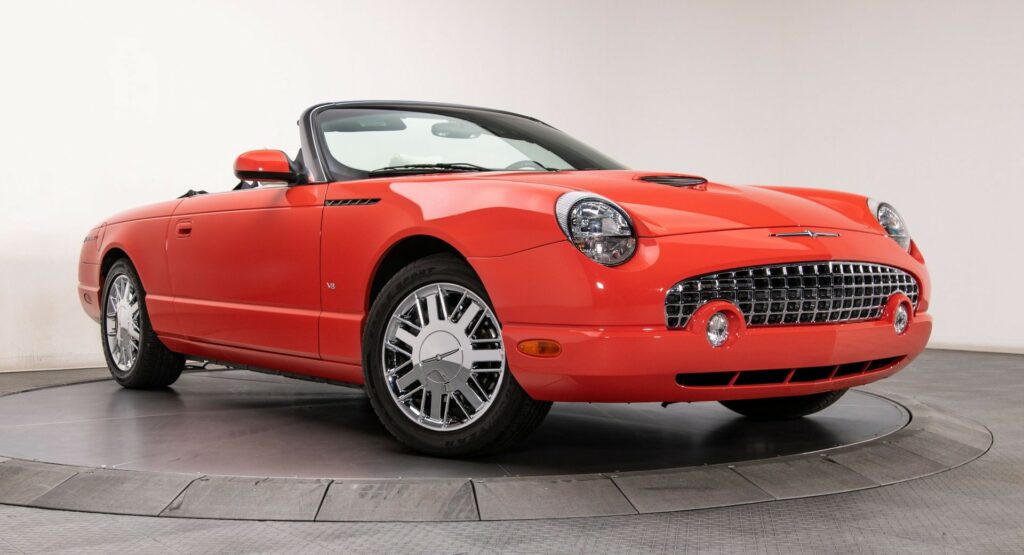 In the James Bond film Tomorrow Never Dies, actress Halle Berry drives a visually identical car. It was one of many Ford-owned (at the time) product placements that included the villain’s Jaguar sports car and Bond’s Aston Martin Vanquish.

This car comes with a bunch of the same standard equipment one would get on a top-end Thunderbird of the vintage. That includes a 3.9-liter V8 with 280 hp (208 kW) and 286 lb-ft (387 Nm) of torque, a five-speed automatic transmission, and rear-wheel drive.

What makes the 007 Edition cars special are a number of very subtle changes. Those include unique 17-inch 21-spoke chrome wheels and a Coral paint that nods to the Sunset Coral color available on the Thunderbird in 1956. Buyers also received a white hardtop with an opera window. A black soft top stows when out of use.

This is a lot of money for a car that wasn’t particularly desirable at the time and isn’t wildly popular now. At the same time, it’s only got 5,863 miles on the odometer and looks to be in pristine shape. It’s unquestionably rare too, though that might not make too big of a difference when we’re talking about $35k.

As the arch-villain of the film says “The distance between insanity and genius is measured only by success.” This generation of the Ford Thunderbird certainly wasn’t the success that Ford hoped it would be. We’ll let you decide if walking away with this special edition puts one in the insane or genius category.

If you’re in the market for a sports car...
Previous articleLamborghini Huracan Sterrato Development Started With A Raised Prototype And A Dirt Track
Next articleLDV’s Electric eT60 Pickup And eDeliver 9 Van Launch Targeting Commercial Sales Down Under
Automoto