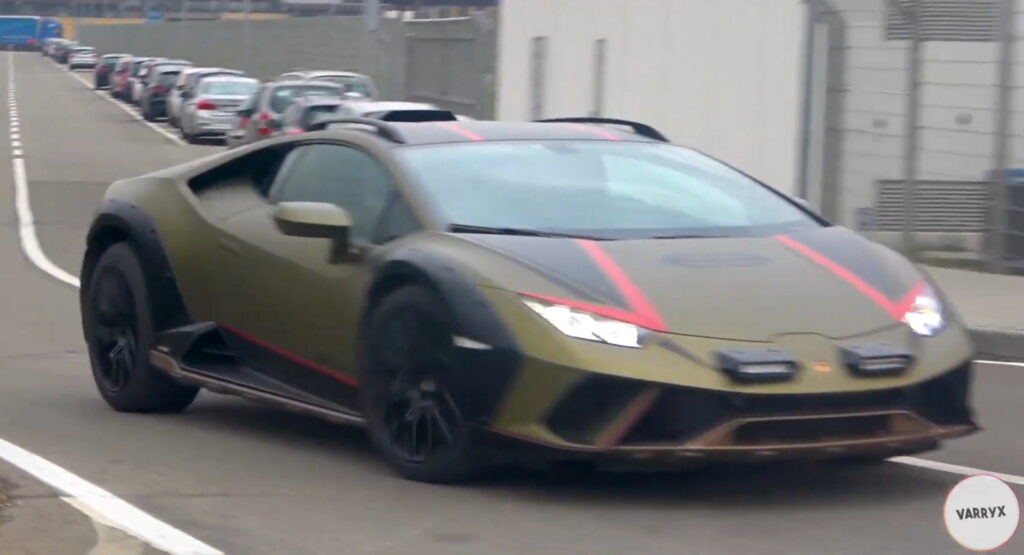 See What The Lamborghini Huracan Sterrato Looks Like In The Wild

Although Lamborghini has now shown carefully staged photos of its upcoming off-road-ready supercar, the Huracán Sterrato, it hasn’t actually revealed details about the vehicle yet. More the point, those official photos showed the car surrounded by fog and mist on an otherworldly set.

Now, though, photos and videos of the supercar have popped up online for our eager perusal. And first thing’s first, as with all supercars, it looks surprisingly small with other, normal vehicles nearby.

Despite having been raised up and given more ride height, the Lamborghini Huracán Sterrato is still shorter than the bed of a work truck on Italian roads. It’s also not much bigger than what appears to be a Nissan Micra that is waiting at a light next to it.

The photos (below) also give us a good look at some of the finer details, such as the louvers over the engine bay, the top-mounted air intake, and the little ducktail spoiler at the back. There’s also something about the cladding over the wheel arches that just works with the proportions of the car in these photos, that were posted to Reddit.

In a video (above) filmed by YouTube channel Varryx, meanwhile, the Sterrato can be seen in motion, doing humdrum things like making a left turn. Its presumably V10 soundtrack can be heard, though, the unexceptional nature of the maneuver means that it’s not exactly howling.

Fortunately, we won’t have to wait too much longer before we find out, because Lamborghini is debuting the new car at Art Basel in Miami, on Wednesday, November 30.

If you’re in the market for a sports car...
Previous articlePorsche Once Tested A V-8 Engine While Developing The 996-Generation 911
Next articleYour Mega Photo Gallery From The LA Auto Show
Automoto