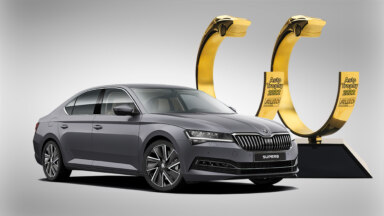 This year, 16,657 readers and online users took part in the 35th round of the ‘Auto Trophy’ readers’ poll organised by the trade magazine Auto Zeitung. They selected the winners from a total of 226 models and 95 brands across 32 categories. One in ten respondents considers ŠKODA the ‘best import brand’. ŠKODA has now secured this title for the ninth time in a row since 2014.

City-SUV ŠKODA KAMIQ prevails in ‘Import SUV under 30,000 euros’ category
In the ‘Imported SUV up to 30,000 euros’ category, the ŠKODA KAMIQ left the competition behind with 16.3% of the votes, landing it in first place. The city SUV combines the best features of an SUV, including a higher seating position and increased ground clearance with the agility of a compact vehicle and the brand’s emotive design.

ENYAQ iV number one in the ‘Imported electric SUV under 50,000 euros’ category
Readers voted the ŠKODA ENYAQ iV into first place among ‘imported electric SUVs under 50,000 euros’. With 20.51%, one in five votes were for the Czech carmaker’s electric flagship. With space to comfortably seat five people and a boot capacity of 585 litres, increasing to 1,710 litres with the rear seats folded down, the ENYAQ iV is an ideal everyday companion for families. Depending on the version, it has a range of up to 544 kilometres in the WLTP cycle, and with short charging times, it a great choice for long journeys.

Two awards for the ŠKODA SUPERB
Readers of the Auto Zeitung were impressed by the ŠKODA SUPERB’s comprehensive equipment, efficient drive systems and the spaciousness ŠKODA cars are known for. It won two awards for these features in the ‘Auto Trophy 2022’. The SUPERB secured almost one in four votes (24.56%) in the ‘Imported mid-class’ category, taking it all the way to the top. In addition, with 24.77% of all votes, it placed first in the ‘Best price-performance ratio’ category.

If you’re in the market for a sports car...
Previous articleRichard Hammond Just Bought The Subaru Impreza From The Grand Tour Special
Next articleAudi RS Q e-tron saves more than 60 percent carbon dioxide at the 2023 Dakar Rally
Automoto