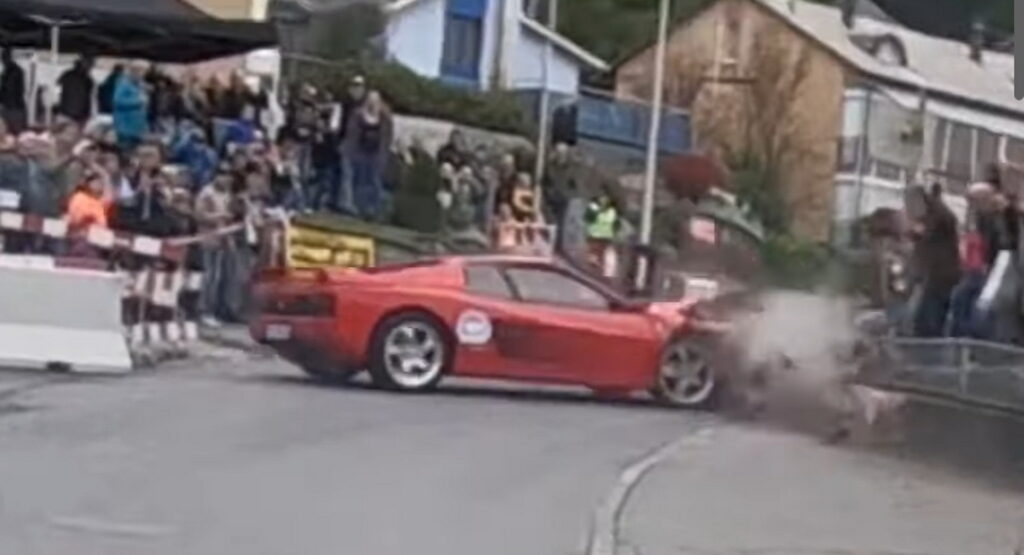 While the internet likes to make fun of Mustang drivers and their propensity to get involved into accidents, this is sadly not their prerogative. An accident at an event held in October in Switzerland is the perfect example of this. The incident saw a red Ferrari Testarossa crash into a low wall, alarmingly close to spectators.

Fortunately, no onlookers appear to have been injured in the accident, and one man, who stood close to the spot of the crash, started clapping sarcastically after the classic supercar came to a halt.

The accident took place at the Michaelskreuzrennen in Switzerland, not far from Lucerne. Seen from multiple angles, it seems that the driver simply misjudged the length of the corner and wound up effectively trying to cut it. Their attempts, though, were stopped quickly by the low concrete wall, which did some serious damage to the front of the Ferrari.

Read: Ferrari 458 Driver Hits A Wall After Spinning Out And Seemingly Forgetting That The Brake Pedal Exists

According to a YouTube video of the accident (below), the Testarossa was being driven on October 9, and had already suffered a more minor accident on the previous day.

Although there is no indication as to the condition of the driver, the accident does not appear to have been excessively violent. Fortunately for everyone involved, the incident happened right in front of a marshal’s post, and they were on the scene quickly to treat any injuries, serious or not.

The damage to the car, the driver’s wallet, and their ego will likely all have been quite serious, unfortunately, and the accident shows just how risky it is to drive a classic at a motorsports event. Anything can happen, and the stakes are only higher in older vehicles.

If you’re in the market for a sports car...
Previous article2023 Nissan Versa Gets More Expensive But Gains More Equipment
Next articleHoppyGo peer-to-peer car sharing from ŠKODA AUTO enjoys its most successful season ever
Automoto