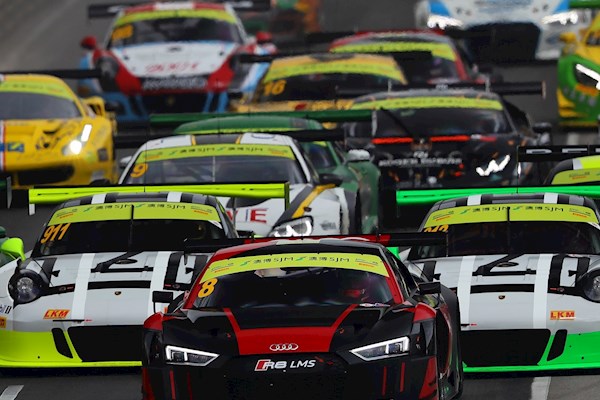 Privateer Filipe Souza won the anniversary edition of the Macau Guia Race for Audi Sport customer racing at the weekend while Edoardo Mortara celebrated second place in the Macau GT Cup. A title for the Audi RS 3 LMS in Italy and podium positions for other customers in Asia and Europe completed a remarkable weekend.

From track marshal to Macau winner: Filipe Souza has realized a dream in his home Macau. The race driver won the Guia Race, which has been held since 1972, in an Audi RS 3 LMS gen II. The 46-year-old privateer driver is thus the first Macau resident to achieve this. At the age of seven, Souza watched Ayrton Senna win the 1983 Formula 3 Grand Prix in Macau as a spectator before later gaining his first racing experience as a track marshal. He then began racing himself on the street circuit of his homeland. Souza has been relying on the Audi RS 3 LMS since 2018. On Saturday, he started the first race in third place but dropped back to fifth position after a poor start. When one driver collided in front of him and another spun, partially blocking the track, the Audi driver accurately matched the gap and stormed from fifth into the lead, which he held unchallenged to the finish. Hu Heng in second and Cheong Chi On in third completed an all-Audi podium. On Sunday, Souza led from grid position one. But close behind the Audi from Team Champ Motorsport followed Lo Sze Ho in a Hyundai as well as Honda driver Andy Yan. After a safety car period, the trio had passed the start and finish in close formation when Lo crashed in the fast Mandarin bend, bringing out the red flag and stopping the race. The scoring took place after the final lap under green flag conditions, in which Souza had been in front. With the victories in the two sprints on Saturday and Sunday at the 50th edition of the Guia race Filipe Souza continues a series of notable Audi successes in the prestigious competition: This race had been won by Audi factory driver Frank Biela in 1996 and former Formula 1 driver Michael Bartels in 1999, both in an Audi A4 quattro. A total of 16 drivers relied on the Audi RS 3 LMS in two different classes at Macau this year.

Title success in Italy: Audi customer team RC Motorsport won the Coppa Italia Endurance in Italy. In the second round at Magione, two Audi driver teams were on the podium after two hours of racing. Nicola Franzoso/Walter Pugliese finished second for Calcagni Motorsport ahead of Carlotta Fedeli/Federico Paolino from RC Motorsport, who thus won the title. Both teams competed on the Umbrian circuit in Audi RS 3 LMS cars with DSG gearboxes.

Second place after comeback race: After two wins in the Formula 3 Grand Prix and three successes in the Audi R8 LMS in the Macau GT Cup from 2011 to 2013, Edoardo Mortara was narrowly beaten in this year’s city race. Although he was in first place on the Macau GT Cup’s initial grid in the Audi R8 LMS, he accidentally followed the safety car into the warm-up lap while the lights were still red. Race control subsequently decided to let him start last behind the field of the remaining 15 competitors. He kept out of an accident at the start and advanced to fourth position over the course of just six laps. In the decisive Sunday race, the Swiss from Audi Sport Asia Team Absolute was again the crowd favorite. On the narrow streets in downtown Macau, Mortara started in fourth place. When a competitor made a mistake in the Melco hairpin on lap two, the Audi driver improved to second position. After eight laps, Mortara was the best of four drivers of an Audi R8 LMS in the field, beaten by Mercedes-AMG driver Maro Engel by just 0.760 seconds. In the Greater Bay Area GT Cup, contested by two other Audi customers in the R8 LMS, Hoi Wai Cheng from Macau recorded third place in each of the GTC classifications.

Trophy at the season finale: At the conclusion of the Supercars Series on the Iberian Peninsula, Team Veloso Motorsport managed a podium result. The two Portuguese drivers Jorge Rodrigues/Patrick Cunha shared an Audi R8 LMS GT4 and finished third in a field of 15 teams in the first 45-minute race at Estoril.

Coming up next week

If you’re in the market for a sports car...
Previous article2023 Lexus RX Gains Sportier Looks And Chassis Tuning Thanks To TRD
Next article“Tremendous drive”: Winners of the BMW Group Award for Social Responsibility 2022
Automoto