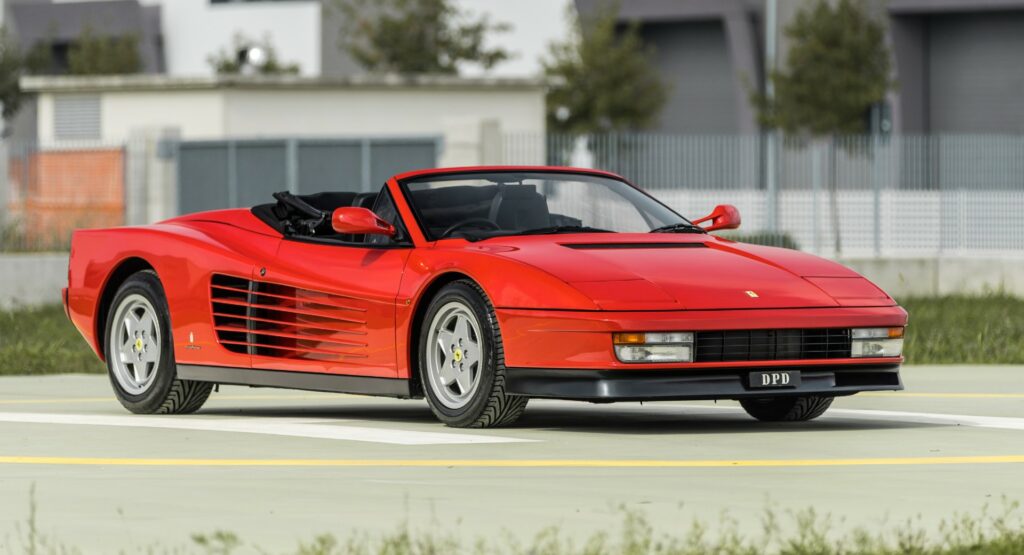 Ferrari might have made 7,177 Testarossas over the model’s lifespan but one thing they never did was built a production version with a convertible top. That makes this Pininfarina Spider ‘Special Production’ quite special indeed. What makes this example even more valuable is that it has just 256 miles (413 km) on the odometer.

Customers of the time clamored for a production Testarossa Spider but Ferrari saw fit to only build one for then Chairman of Fiat Gianni Agnelli. Every other convertible Testarossa on the planet was built by another firm and a very limited few, built by Pininfarina, just like this one, are considered some of the most desirable.

According to the listing from RM Sotheby’s, the firm was evidently tasked with building seven custom Spider adaptations for Brunei royalty. During that process, it built a “very small number” for important clients, including the individual consigning this exact car. It has never been registered for road use but don’t worry, it’s ready to tear up the roads at the hands of its next owner.

As seen in the video above, this car is in outstanding shape. That’s all thanks to a complete restoration that cost somewhere north of €177,000 (178k US). After decades as a static display, it spent time back at Pininfarina where a team repainted the car, refreshed the interior, and restored the top to fully-functioning condition.

Then, it went to Carrozzeria Zanasi, the same place that cares for the finishing of all modern Ferrari supercars. There, it had a complete mechanical restoration including a new clutch and fuel pump. Whoever buys this Ferrari on November 5th isn’t just getting an incredibly rare car, they’re getting one that’s ready to be ridden hard.

If you’re in the market for a sports car...
Previous articleFerrari Returns To Endurance Racing With 499P, Heading To Le Mans Next Year
Next article2022 Mexico City Grand Prix – Saturday
Automoto